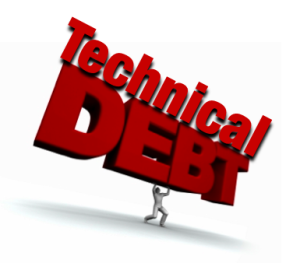 January is a month of reckoning. We think of all the extras we bought because while we were in the store for one thing, we thought we “might as well” pick up something else. We think of every holiday party where we had “just one” extra appetizer or drink. Now people are starting to get the bills for charges they racked up during the holiday season. And we also see the scale moving in an unflattering direction, and shedding that addition is top of mind.

As you begin 2016, are you considering the ways that you can also plan to shed the fat of your team’s outstanding technical debt? Do you have a plan so that as you begin new projects, you adopt the right processes to prevent you from accumulating as much technical debt as you did last year?

Here are 4 things you can do to be more mindful (and more productive) in the first quarter:

We all have that one thing that we try to hold on to, no matter how little benefit they may actually represent. It might be a couple of half-hour weekly meetings. It could be an approval process that has seen better days, and now amounts to nothing more than bureaucracy and wasted time for your team. How will you make time for those new resolutions, if you are still tied down to the same old schedule?

Do you still have scripts and packages scattered here and there, in different environments and on different people’s computers that are not in version control? Make a list, environment by environment, collect them, and add them to your source code library. Don’t worry about cleaning up yet; you can refactor later.

Build and deployment scripts are typically forgotten when it comes to refactoring.  But imagine how impressed your customers will be when they request a fix, and you can turn it around faster than they were getting it last year. For example, if you are besieged by bloated ant scripts, take the first quarter to start migrating to Maven projects. Yes, ant scripts are easy for new developers and build engineers to grasp, but we didn’t get into the software business to become complacent.

Why are you doing the work and reporting on it? Chances are good that your agile tool of choice, whether TFS, the Atlassian Suite, or CA Agile (formerly known as Rally), can help you connect the dots. Likewise, you can leverage a monitoring strategy that not only alerts you to problems, but also take action automatically to resolve those bugs.

As you lighten your load and free up an hour here or there from your schedule, you will feel more inclined to guard that time. You will be better-situated to take proactive action that will prevent you from accumulating additional technical debt.